Richard Parr, Director at Richard Parr Associates, in conversation with Anke Summerhill about how he become an architect and the importance of modern and traditional design.

Undefined by architectural style, they treat each project as an individual journey with no preconceptions or predetermined aesthetic.

The service they offer goes beyond just design. It’s all encompassing and highly personal. Richard leads each project from the beginning to the end, supported by a highly talented team.

Hit the play button below to watch the full conversation, or read the full transcript below:

Anke Summerhill: Hi, I’m Anke Summerhill from Minotti London. And today I’m at the lovely studio of Richard Parr Associates in Notting Hill. And here I am with Richard. Richard, thank you very much for having us today. I’m really excited to be here.

Richard Parr: Absolutely a pleasure to have you here.

Anke: Yeah. So Richard, how come you’re an architect, Have you always wanted to be one?

Richard: To be completely honest, always. Yeah. When I didn’t necessarily know, but actually I’ve always loved buildings, I’ve always drawn. It just seems the natural thing for me to do. And I just found something that I just love doing and I get paid for doing it, so it fits.

Anke: Okay. And so were you influenced by anyone at an early age that motivated you to become an architect?

Richard: Yeah, I was very lucky. My parents were very keen on taking me to see buildings. And actually looking back, they schlepped all over the place taking me to see interesting things. But I think one of the seminal things that I was taken to see as a child was Coventry Cathedral.

Which sounds like an extraordinary sort of thing to remember. But I remember being absolutely awestruck. And now I use that and think about that as really important … It is really underrated.

And I think it really embodies a lot about what the practice is about because it was a recreation of something on a bomb site. But it was a very potent site.

Very important mediaeval cathedral. But leaving the religious side apart. Actually what they did then I find really fascinating because it created a new spirit.

It brought in all sorts of artists from the John Piper who designed the windows to Graham Sutherland, to Epstein, all these people, and obviously the architecture. Where actually it was a new movement. And I think very underrated and very, very powerful thing to go and see. And the use of materials, et cetera. So if you ask me for a key building, that is it.

Anke: That’s the one.

Anke: Okay. Well, it is certainly an impressive one. So you describe yourself as a modern traditionalist because you love combining traditional craftsmanship with technology, and contemporary design. Have you always been like that or is that something you’ve grown into?

Richard: I think I’ve always had a fascination with history. That was probably the best mark I got in my rather dismal school career.

Anke: Well, you can’t have done so badly.

And that’s not to say that we need to copy. Because we learn from the past, and we project into the future. So we are modern, but we are traditional because there are some values that stand the test of time. And others don’t.

Anke: Absolutely. And there’s a lot to learn.

Richard: Yeah. It’s also good to look at mistakes of the past.

Taking old buildings, and rather than restore them in the, what many people do, the traditional manner, you adapt them to modern day life. And there are little fun touches, quite modern touches to the old buildings. How did that happen? Is that because of that love for old-

Richard: I think it’s because of that love. But also, I mean, we live in a country full of old buildings.

Richard: And we have one of the oldest building stocks in the world in this country. But a lot of it is actually not very good.

And I think there is a real danger of taking things and preserving them for the sake of preserving them. So we very much think, well, what is the best bit about that?

What is the bit we should really celebrate? And then we’re not too worried about covering some other things up, because you don’t need to see everything.

And we also need to project things and we need to create new life. And I think that projecting something, which is a legacy, way into the future is more important than saving a few little bits of probably not very good timber work or brickwork or whatever.

Anke: You also mentioned to me earlier, that you’ve always loved or had a bit of a fascination for the Italian architect, Ponti. Is there a reason for this or what is it that you love about him or his work?

Anke: And why do you think that?

Richard: Because I find that period of Italian history really interesting. I find that emergence, in the same way that something like the post-war British movement of reinvention I think has not been looked at enough, but I think is really exciting.

But Ponti did that in Italy. And if you look at his early work, it’s quite classical. It’s very gentle, very classical, very elegant. But then he took that elegance into utter irreverence and extravagance. But not extravagance in sort of unnecessary design, but just real enjoyment. 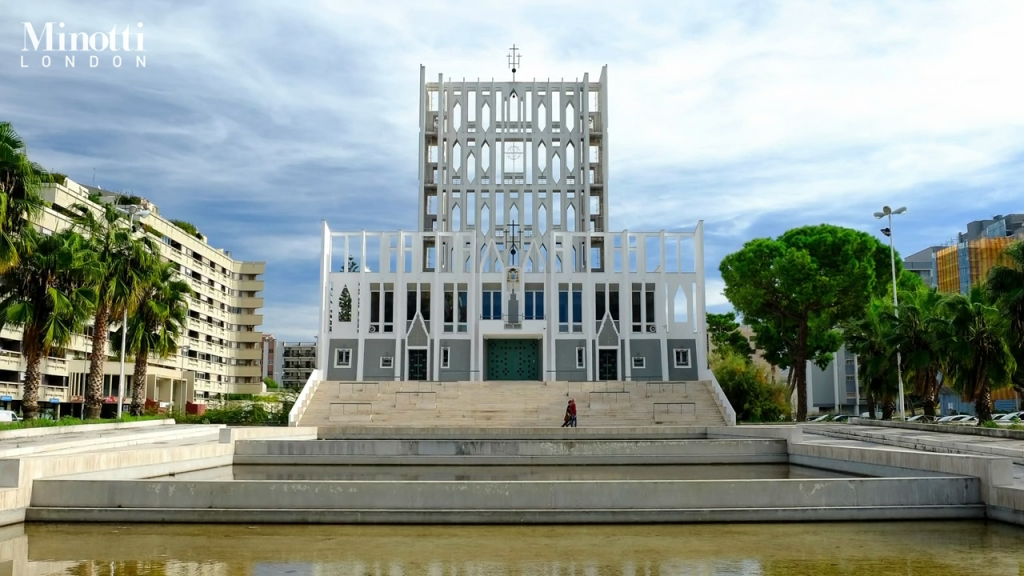 And he created styles. He just departed from the norm. And I think it just represents that excitement of an era.
There are lots of things, his detailing, his use of materials, his referencing back to things that are slightly historical, but then just blowing them up and turning them upside down.

Richard: A bit like me. But I don’t put myself on that level. Sadly. But his use of colour as well is just extraordinary. And shape. There’s no convention, he’s not a slave to shape or colour or form. And I think that’s really exciting.

Anke: So, we could say he’s definitely a bit of an influence on you.

Anke: So, any other influences? I know you spent some time in Spain, is there anything you’ve taken away?

Richard: Yeah, I mean, Spain was my first job after graduating at the … I went to Spain for a month to work with a really amazing young architect on a competition. I stayed there for 18 months. I mean, it was a really wonderful time because Spain had been undeveloped.

And it was coming out. It was only just over a decade after the fall of fascism. And there was no infrastructure, they were building everything. And they weren’t afraid to be bold. So I was fortunate to work for an architect I think that was really exciting.

And a couple of things I learned from him was that sort of really ruthless reinterpretation of historical fabrics.

Richard: Don’t be scared to add that extra layer on. And the other thing I really learned from him was using typologies.

Some of his early houses were very contemporary type renderings of traditional. And I guess if there’s another thing, it’s actually light.

Richard: The light in southern Spain is extraordinary. But when I came back to London afterwards, everyone moans about the greyness, but actually, I see it as silvery, very beautiful light here.

Richard: It’s a different light. There it’s very intense. And you don’t need much of it. Here you need to play with it in a different way. And I think I learned a lot from that period.

Anke: Absolutely. Yeah. So it was quite a formative time then because you’ve just graduated and that was your very first job. So that’s really stayed with you all your life.

Richard: Yeah. It was a good influence. Well, he was a mentor, he became a mentor.

And I looked on your website obviously and checked out your projects. And I particularly like the one you’ve done in Chamonix. Which is really, really beautiful. And although it’s very modern, somehow it blends into the landscape. Amazingly. 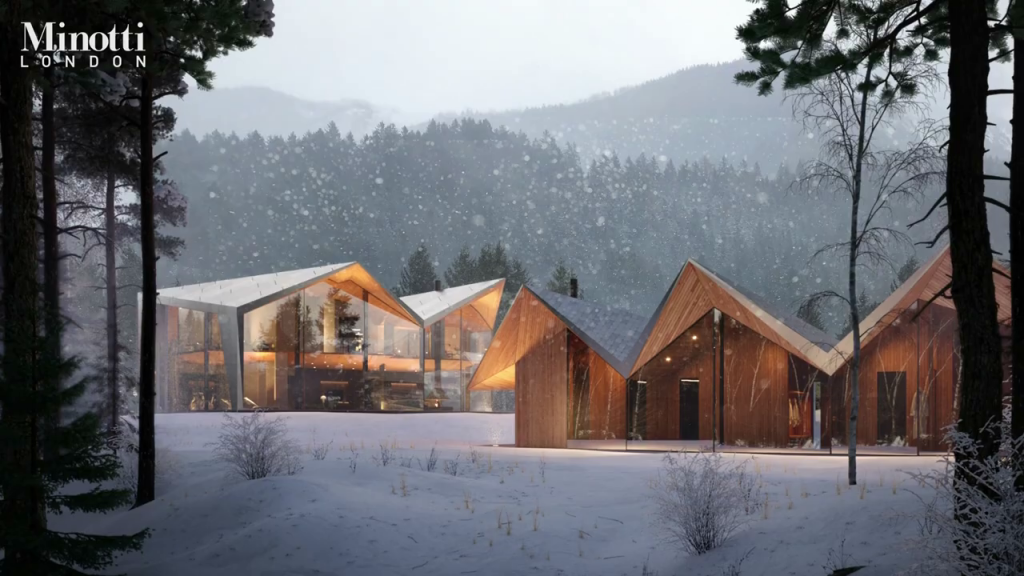 It reminds me a little bit of when I drive through the Alps you see this old dilapidated barn. And initially, when I see the shape of that building, it reminds me of an old barn. What was the brief or did you have complete freedom and that’s just what you felt was appropriate?

Richard: Well, I think wherever we go, we try and ingest the site, the place, nature, the landscape, a lot of our work is about architecture in the landscape.

And that doesn’t necessarily mean hundreds of rolling acres or mountain sites. It could be small sites which are contained, but it’s about that relationship with the landscape around it.

So a project in the Alps, they are very key forms that are defined by nature, falls of snow, peaks of mountains. And so we extract something. It’s a bit like making perfume. You extract lots of things and then you recreate something else. 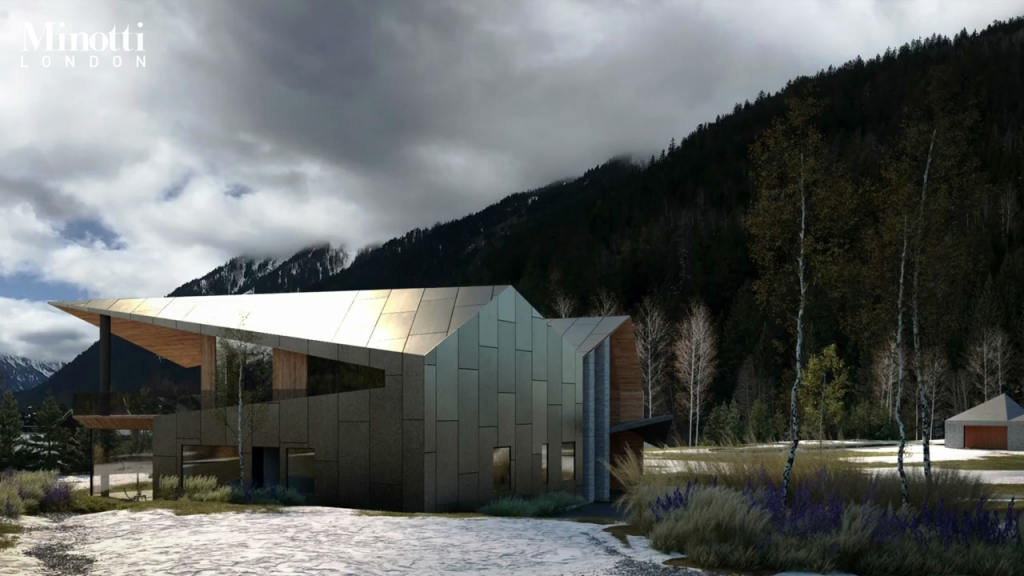 But the essence is there. And that’s why I think a project like that is successful in its form. And it works with the environment it’s in.

Anke: Yeah. So, what is it that you would like to be remembered for? A legacy.

Richard: I think our work is legacy work. And I think I’d like to be remembered for things that … they’re going to see the test of time. And we build responsibly. We think very carefully. And we try to be very honest in what we do.

And we want to create legacies on site. So if we’re going to dig up a piece of mediaeval landscape in Oxfordshire, I want to be absolutely sure that what I’ve replaced that with is not just a whim. It’s not a trend. It’s not a gimmick. It’s something that’s going to just last for generations and generations.

And I think that actually that great tradition of English house building is something that I want to be part of. A tiny little bit of it. Leave my little mark with a series of lovely projects that people can enjoy for the next hundred years or two.

Anke: I absolutely love your work. And thank you very much for having us today.

Richard: It’s a real pleasure. I loved chatting. Loved having you here. Thank you so much.

Ready to talk to one of our expert team about your next interior design project?