How to Establish Rhythm in Interior Design

Rhythm is a key principle in interior design and encourages one’s eye-line to move in an organised way around a space while holding a person’s interest and allowing them to take in every part of the design.

The principle of rhythm is centred on the visual repetition of patterns, by recurrence, continuity or organised movement. By repeating colour, pattern, texture and shapes throughout a space, one creates visual interest and rhythm.

We most often associate rhythm with music, which is used to tie in all the aspects of a song. In interior design it works in the same way, tying the individual design elements together in a subtle pattern.

Achieving rhythm in interior design is often considered the secret to a well-executed design, and plays a large role in how the space is perceived, both in terms of functionality and whether or not the result is aesthetically pleasing.

The 6 Types of Rhythm in Interior Design

In this guide, we discuss the six main principles of rhythm: repetition, radiation, contrast, alternation, transition and gradation. Using these mechanisms will help create a sense of movement in an interior, leading one’s attention from one element of design to another. 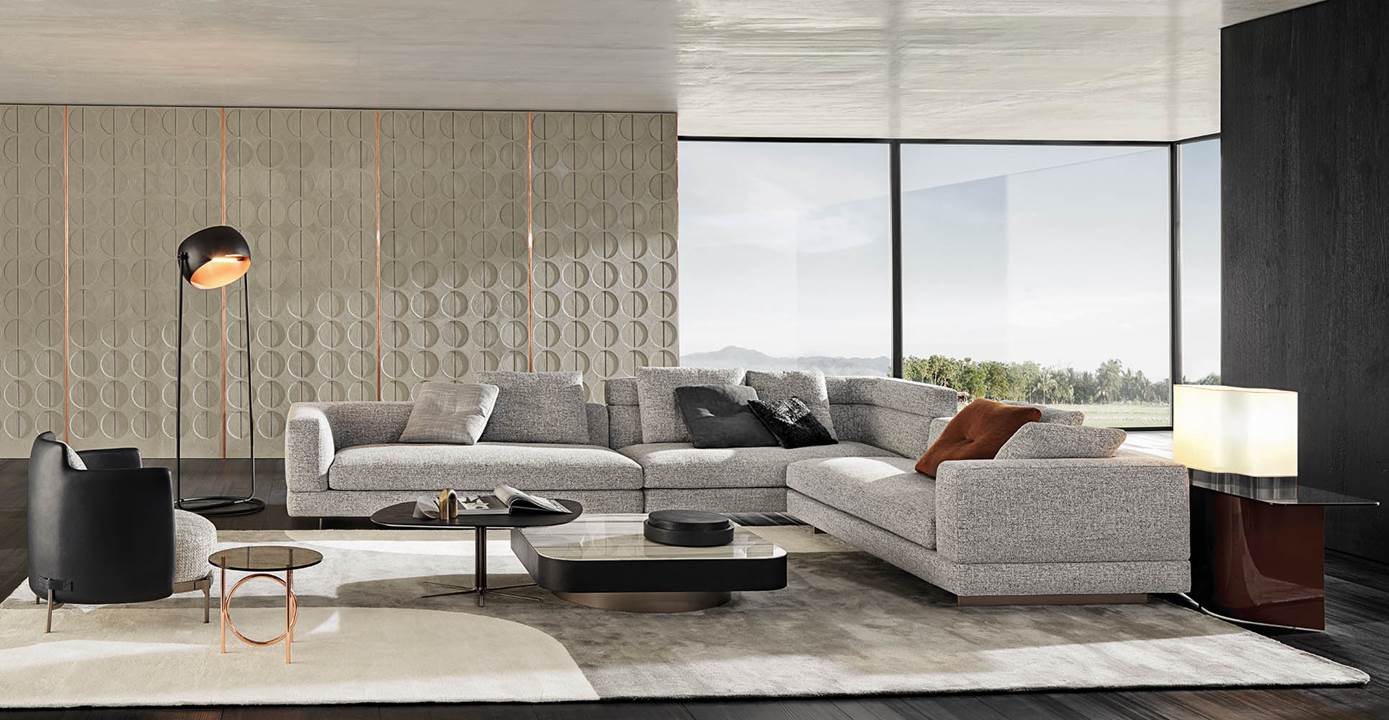 Repetition can be the simplest way to attain rhythm in an interior design scheme. By repeating elements such as colour, lines, shapes, texture, pattern and light in an organised and regular way one can give the design a clear sense of cohesiveness and stability.

This principle doesn’t have to be obvious, and the steady rhythm by repetition in interior design aims to lead the eye around the room seamlessly and to keep the space interesting.

Repetition can be achieved by using continuous architectural features such as columns or upright posts. Repeating framed prints of the same size is also an effortless method to achieve a gentle rhythm.

Soft furnishings such as cushions and rugs are a simple way to achieve repetition, whether with patterns or colours. Patterns that are similar but not identical will add visual variety whilst maintaining harmony.

Rhythm can be achieved through radiation, whereby design elements are balanced and repeated around a centrepiece. By spreading movement in various directions from a central point, one can create interest from the point from which the elements radiate.

One can achieve radiation with a circular dining table with a central vase of flowers and surrounding chairs radiating from the table, or a seating area where the furniture is grouped around a focal object. Adding a pendant light above the centre of a group of elements will also emphasise radiation.

Creating contrast through the use of directly opposing colours and shapes alternated in a pattern creates a sense of rhythm. This creates visual interest and repetitive patterns, to keep the eye moving around the space.

Effective ways to implement contrast include:

It’s possible to use multiple contrasting elements in a design and combine some of them together such as colour and shapes.

Alternation in interior design creates rhythm by alternating two or more elements in a regular pattern. This pattern could be ABCABC or ABBABB, but always repeating in the same order.

Examples of alternation can be seen in tiling, brickwork and parquet flooring. This is similar to repetition, but a little more complicated. 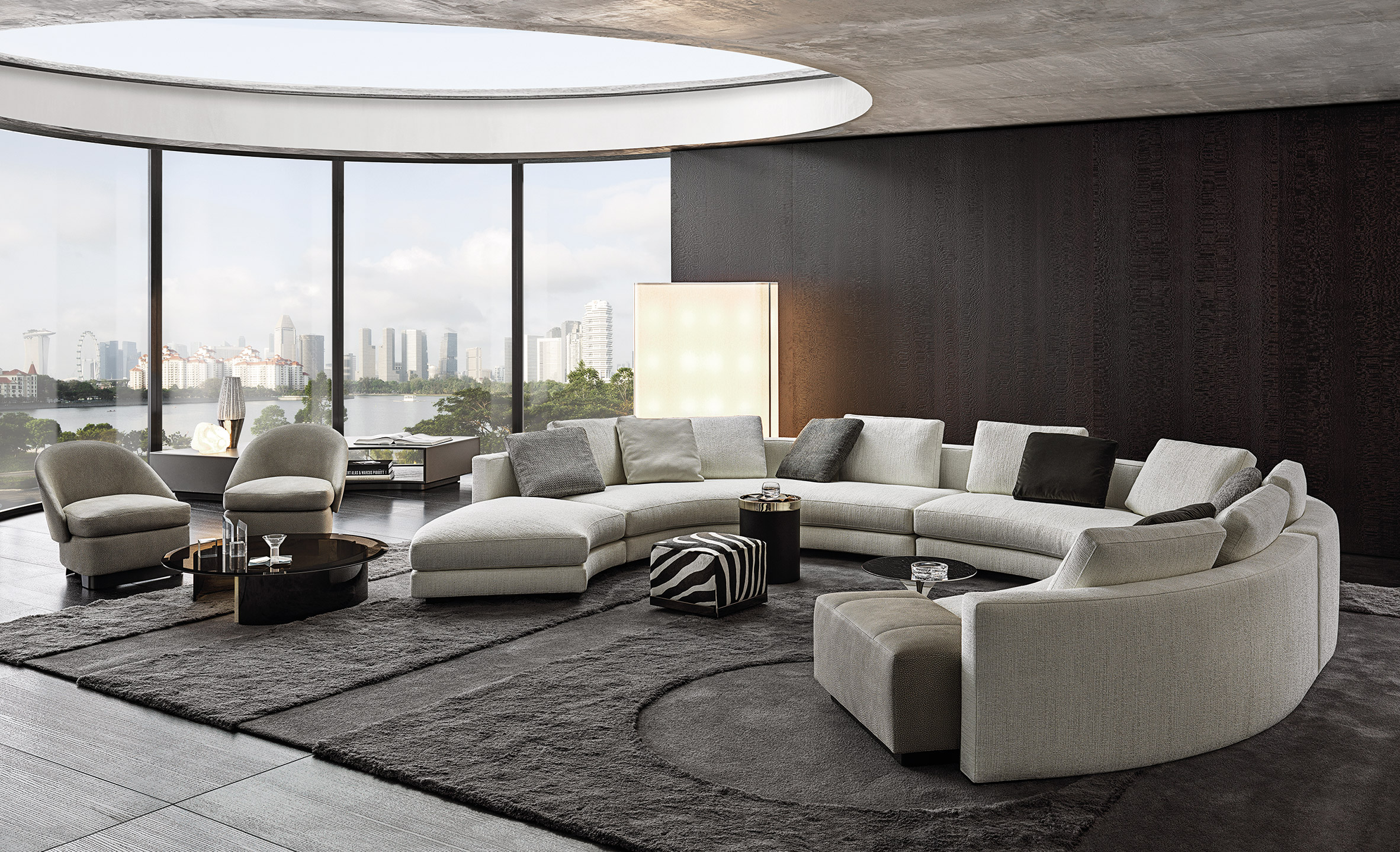 This Daniels Sofa provides the perfect transition from the skylight and the curved window, creating a sleek and elegant interior design | Designed by Christophe Delcourt for © Minotti London

Introducing rhythm through transition leads the eye through a continuous, uninterrupted flow from one area to another. It’s a design element, usually a shape, that subtly assists in navigating a space.

Typical examples of this include rounded edges, winding paths and arched doorways. However, this can easily be employed elsewhere, for example, a seating area that features curved furniture exemplifies transition, such as the curved lines of a sofa accentuating the curves in a bay window, leading the eye around the space. 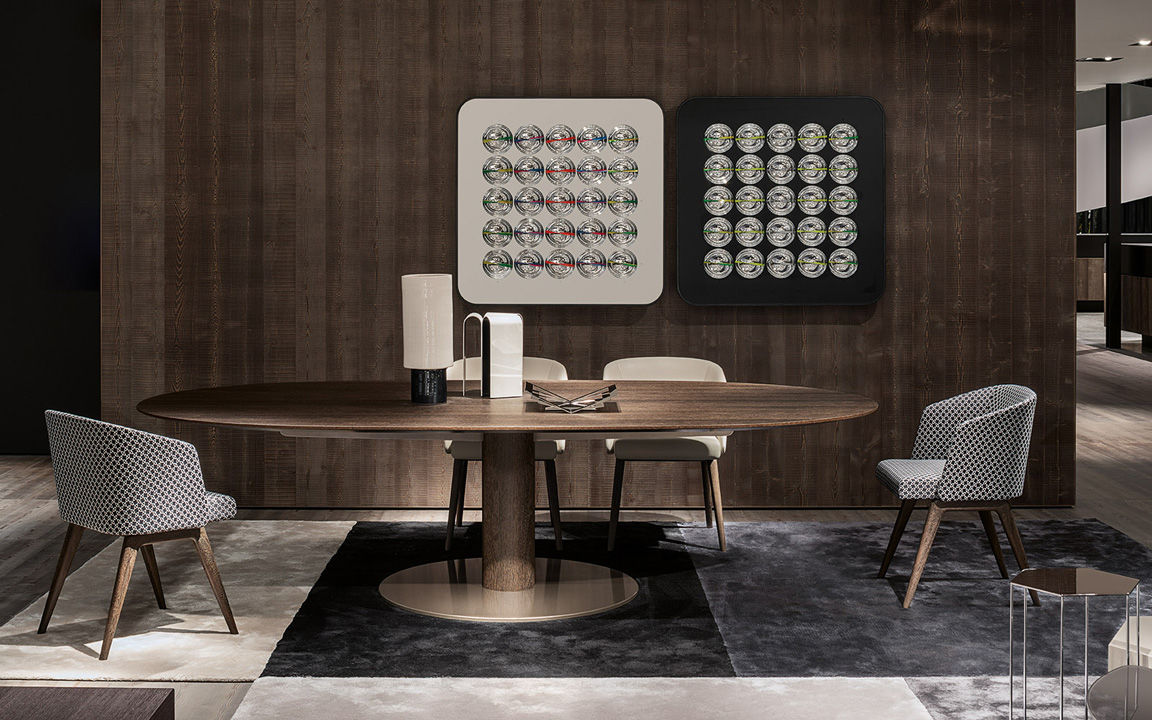 Gradation is an easy technique to employ, as shown here by the different sized ornaments that rest on this Bellagio Dining Wood Table | Designed by Gordon Guillaumier for © Minotti London

Gradation uses a sense of progression to move the eye from one end of a space to the other. This principle of rhythm can take the size of the same objects from small to large, or a colour from light to dark.

Stairs are a great example of gradation, allowing the gaze to move seamlessly between floor levels. Differing sizes of objects such as floor vases or seat cushions can create rhythm through gradation, or a cluster of different sized candles on a tray will create interest due to the progression they exhibit.

One can also achieve gradation through colour, whether a monochrome scheme with each element in a slightly different shade or the ombré trend which embraces colours progressing from light to dark.

In this guide, we’ve discussed the six key principles of establishing rhythm in interior design, which connects movement between different elements of the design and contribute to the overall success of the space:

One doesn’t need to use all six of these techniques in a single project. Incorporating one or two throughout different components of the design can help to visually unify the space, while still leaving enough variation to keep it from feeling bland.

Similar to how the individual instruments of an orchestra sound good on their own but sound better when part of a symphony, so too do the individual elements that make up an interior.

Request Callback
We use cookies to ensure that we give you the best experience on our website. If you continue to use this site we will assume that you are happy with it.OkPrivacy policy